The Mission Road: “And lo! A light from Heaven shown down, And I beheld through the briars The Mission Road of the Franciscan friars.” Early on the morning, April 6, 2013 while visiting the old Suwannee River crossing at Charles Spring, I saw this beam from the heavens shining as if to mark the trail for me. This digital image, entitled “Photograph of the Bellamy Road, Charles Spring, which is thought to be a part of the Old Spanish Trail,” was placed in the Viva Florida 500 statewide time capsule and was sealed in the R. A. Gray Building, Tallahassee on December 31, 2013. It will be opened on Mar. 3, 2095.

The state of Florida is entering some significant anniversaries in its history. The year 2013 ushered in Viva Florida 500, a state effort to celebrate and promote the Spanish discovery of Florida and 500 years of Spanish influence upon it. The year 2015 marked the 450th birthday of St. Augustine, the oldest continuously occupied city in the United States. Consequently there has been a renewed interest in the most famous road in the state’s history. Yes, Florida can boast as having the oldest city, but perhaps it also has the oldest road, for almost from the inception of St. Ausustine, inroads into the hinterland ensued. It is surprising that Florida’s royal road, El Camino Real, has never been accurately defined until now. Many have heard of the Old Spanish Trail, but have misleading ideas of its use and course. Often times, it is confused with the trail of the same name out West. Some think it extended from St. Augustine to Mexico, and, perhaps, the greatest error, is to associate it with U. S. Highway 90. Robert Hurst takes the reader on a 465 mile journey through the eyes of early Spaniards and others across the marshes, swamps, rivers, natural bridges, and highlands of Florida from St. Augustine to Pensacola. He describes the methods of ferrying men, cargo and horses across the many rivers encountered. The reader will travel in the footsteps of Spaniards, English and American soldiers. He will experience the hardships of river crossings and encounter the various tribes of Native Americans, their villages and the Catholic missions along the way. He will experience the tired traveler’s joy upon reaching the many remarkable springs along the trail. In short, this book is about the struggle of man and beast to penetrate the wild, untamed Florida wilderness of the seventeenth and eighteenth centuries. The reader will discover the course and experience what travel was like along the real Old Spanish Trail. Accompanying the text are appendices, photographs and maps. In the appendices, the reader will discover driving roads and hiking trails that replicate the experience of travel on this most famous and historic trail. The photographs illustrate the pristine parts of the existing trail, and the early and contemporary maps enable the reader to actually visit parts of the old trail.

This is a book that will not only interest the reader with historical and archaeological interests, but also the outdoor adventurer and the Florida heritage\ecotourist. The publication of this work is long overdue. Florida’s oldest, most famous, and longest road has not received the attention it deserves. It is the author’s hope that the attention this book will receive will help save what is left of one of Florida’s most important heritage sites.

Personalized copies of The Spanish Road are available from Robert Hurst. They are also available at: Yawn Publishing LLC 2555 Marietta Hwy, Ste 103 Canton, Ga. 30114 or online at www.yawnspublishing.com and Amazon.com. eBook available at Amazon.com. Bookstores, universities, libraries, and other small or large volume purchasers can order at Yawns Publishing (678-880-1922). 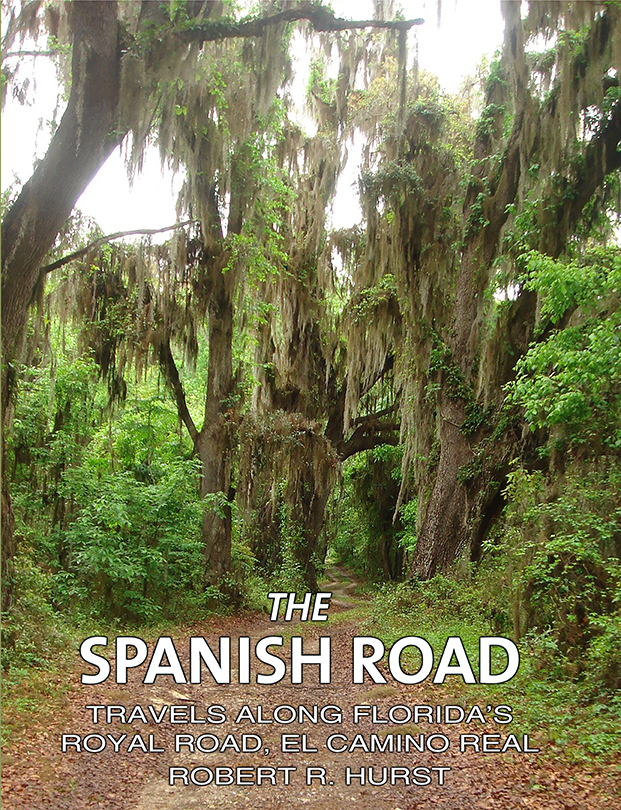