Have you ever hiked a Native American trading path? Or the Old Spanish Trail? Or General Jackson’s Trail? Or in the footsteps of a Revolutionary band of soldiers? Well there is a part of the Florida Trail that is at least 230 years old and embodies all of the above! An event and anniversary recognized its history and recreational asset.

BICENTENNIAL ANNIVERSARY OF ANDREW JACKSON’S MARCH DOWN THE JACKSON TRAIL 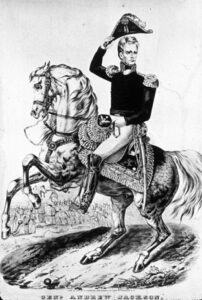 “After a fatiguing, tedious and circuitous march of twelve days, misled by the ignorance of our pilots and exposed to the severest of privations, we finally reached and effected a passage over the Escambia.” General Andrew Jackson to John C. Calhoun, Secretary of War, June 2, 1818.

This march on Pensacola was by an army of approximately 1200 men, wagons and heavy artillery across West Florida during the final stages of the First Seminole War in Florida. While campaigning in Florida, Jackson had received word that the Spanish government in Pensacola were harboring 450 Indians, who were alleged to have plundered and murdered Americans. In addition, the Spanish had seized the schooner Arrelia that was taking American supplies to Fort Crawford. Jackson reacted by  marching west across the relatively unknown land of West Florida and eventually occupying Spanish controlled Pensacola.  This act exposed the weakness of the Spanish and resulted in Spain ceding the Floridas to the U.S. in the 1819 Adams-Onis Treaty.

Probably on May 18 the army camped at David’s Lake, which thereafter became Lake Jackson. Florida and Alabama share this border lake. On the north side, Alabama erected an historic marker recognizing the alleged campsite of the invading army. 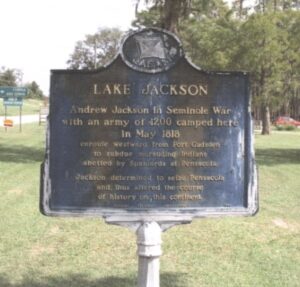 It wasn’t until somewhere between David’s Lake and the Yellow River that they found the well-traveled trail called the Lower Creek Trading Path. [i]

“The Path between Mounty Pleasant [Floridatown] and the Fork of the Lower Creek Trading Path is plain and well trod,…” Joseph Purcell, Map of the Road from Pensacola in West Florida and St. Augustine in East Florida, 1778. 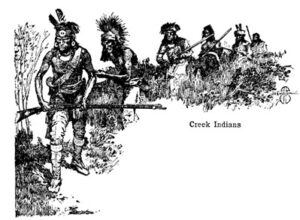 Jackson’s troops were not the first army to tread on the path. In 1778 a small detachment of British Soldiers led by Captain David Holmes marched from Pensacola on their way to aid the besieged Governor Patrick Tonyn in St Augustine.  This was the time of the American Revolution and the Americans were attempting an invasion to take control of St. Augustine. The British had Creek and Seminole allies with them as well as the cartographer, Joseph Purcell, who mapped the road and terrain that he encountered. His work in a virtual unknown area was used by pioneers even into the 1820’s, and is the only definitive map of what we call the Old Spanish Trail, El Camino Real. 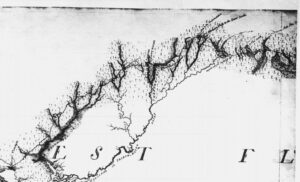 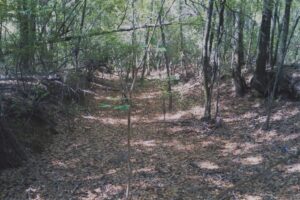 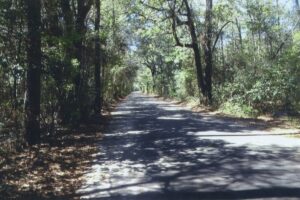 This trail was the major commercial land route from Pensacola to the homeland of the Lower Creeks in Georgia. It’s first 79 ¾ miles however were also used to travel east. At a point north of present Lockhart, Alabama, the traveler, who had so far been traveling northeast, could fork to his right and continue east along the Red Ground Path and could by connecting with other trails eventually reach St. Augustine. 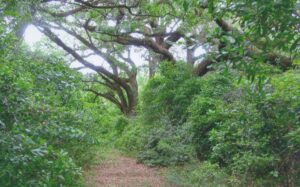 Primitive Trail, thought to be on the Jackson Trail, Pace, FL

After Jackson’s march down this path, it became known as “Gen’l Jacksons Trail” and then the Jackson Trail. I used to think as I viewed the old 1826 and 1828 survey maps that the designation “Gen’l Jackson” was the surveyors short hand, but I’ve come now to believe that it was simply the Cracker way of rendering phonetically their pronunciation of Jackson’s title.[ii] 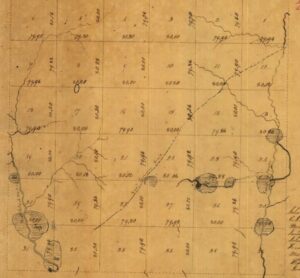 Jackson’s army descended from  the “mountains” of Florida – actually hills with an elevation over 300 feet near present Laurel Hill. Here lie the highest elevations in Florida.[iii] Crossing the Yellow River, they followed a 200-250 foot elevated ridge to the Blackwater River. 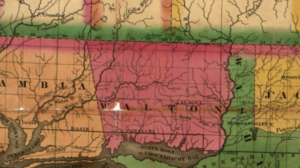 Portion of I. G. Searcy’s 1829 Map of Florida showing the “Jackson Trail”. Courtesy Library of Congress. 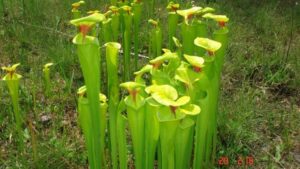 It was along this ridge and probably around May 19 or 20, 1818, that his army marched into what later became the largest State-owned forest in Florida, the Blackwater River State Forest. Located in Okaloosa and Santa Rosa Counties, and established in 1939, it holds, along with Alabama’s Conecuh National Forest, the largest contiguous longleaf pine/wiregrass communities in the nation. The colorful pitcher plants are interspersed here – all five varieties. These carnivorous plants lure, trap and digest insects. Hills with titi swamps and waterways in the folds dot the landscape. Occasionally a patch of sand pine scrub, a view of farmland and a boardwalk or bridge across a cypress-lined creek will be encountered. Fox squirrels inhabit the forest and are enormous in comparison to the customary gray squirrel.

There were several waterways that the traveler would encounter on Jackson’s Trail, all tributaries of Blackwater River. Panther Creek, called Mole Branch by Purcell, is described by Young as “twelve feet wide with open banks and sandy bottom.” Next would be the Blackwater River, one of the few shifting sand bottom streams which remains in its natural state. The 18th Century Spanish traveler Don Lorenzo y Ayala called it the Colorado River. Purcell called it Red Clay Creek or Futeechattelagga. Traveling south, next would come the upper reaches of two prongs of Muddy Branch, and then Beaver Creek, perhaps Purcell’s Boggy Cut. At the west boundary of the Forest, the old trail crossed Juniper Creek, Purcell’s Palmetto Creek or Tallahatchee with “…high steep hills on the east and a palmetto flat on the west…” Both Juniper and Blackwater are kayak waterways. 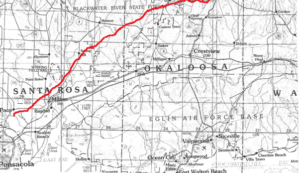 In 1970 this historic trail received some recognition by the creation of a hiking trail by the forest rangers. Approximately 20 miles of trail from the Panther Creek-High Bridge Road intersection in the north to the Big Juniper Creek-Red Rock Road intersection in the south roughly follows the old footprint.[iv] The late judge and historian E. W. Carswell of Chipley, Florida claims to have suggested the idea to the Forestry Service. About 100 people attended the ribbon cutting on December 11, 1970. In attendance was Agricultural Commissioner Doyle Conner, Forest Director John Bethea and Judge Carswell. The first group to hike the total length of the trail was Crestview Boy Scout Troop 30. It is maintained by the Western Gate Chapter of the Florida Trail Association. In 1983 it became part of the Florida National Scenic Trail.  There are only 11 National Scenic Trails in the nation. 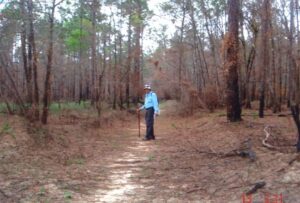 The hiker might visit a couple of historic sites along the trail. The first would be the site of the Indian then pioneer settlement of Otahite, meaning “damp place”. It was probably located near Peaden Bridge, and on the west side of Blackwater River. In 1880 a new post office was requested for the community. In 1909, the post office was moved about 2 miles to the west. There can be found today the Otahite Cemetery just to the south of the junction of Beaver Creek and State Forest Roads. The Wilkinson, Peaden, Mashburn, Snowden and Turvin families are associated with the community and cemetery.

Crossing into Santa Rosa County and along Cemetery Road is the old Ates Cemetery. The oldest burial that I have found dates to 1891, and the latest 2015. Two of the main families buried there are Ates and Foster.

END OF THE TRAIL

The Indian Removal Act of 1830 spelled the death knoll for the old trading path. Trade with the Creeks ceased, and newer improved roads shortened the distances between the newly created settlements of the white man. The 1824 Federal Road for example improved the travel time across Florida from Pensacola to St. Augustine.  Nevertheless parts of the old trail were used even into the present. Small sections of State Highways 2 and 4 and County Road 189, as well as of forest roads High Bridge, Sherman Kennedy, and Peaden Bridge are in its footprint. Thanks to the Florida Trail Association, the old trail has come to life once again. A recreational trail has been created as well as a portion of history preserved, a win for both eco and heritage tourism.

On Saturday May 19th 2018, the Western Gate Chapter of the Florida Trail Association held an approximately 10 mile hike along the Jackson Trail in recognition of the march of Jackson’s army. Among the participants was the Crestview Boy Scout group, observing the first hike on this trail in 1970 by Crestview Troop 30. 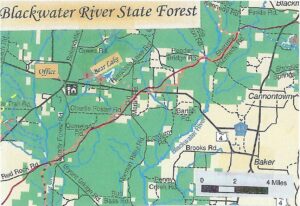 Map of a section of Blackwater River State Forest showing the Jackson/Florida National Scenic Trail in orange and blue and the historic Jackson’s Trail/Lower Creek Trading Path in red. 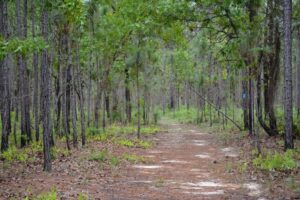 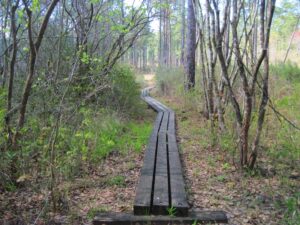 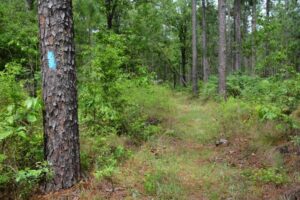 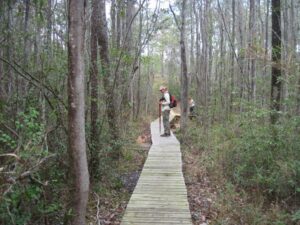 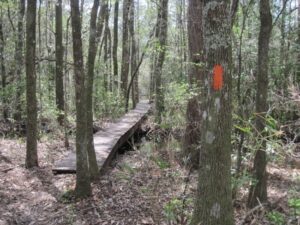 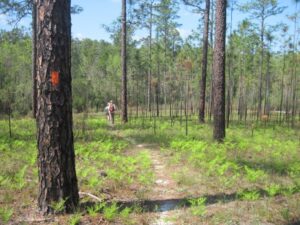 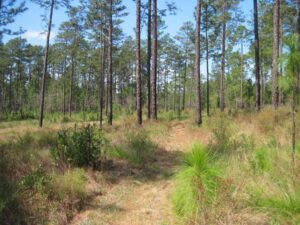 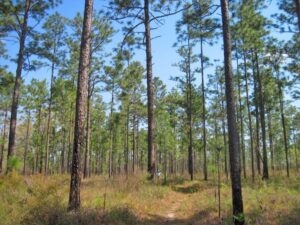 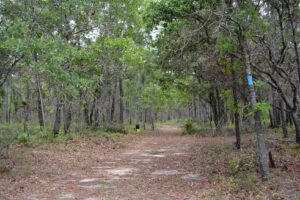 [i] There were several “Lower Creek Trading Paths” in the southern part of what eventually became the United States.

[ii] Judge E. W. Carswell assumed that this trail was the “Red Ground Trail” as implied by historians Mark F. Boyd and Gerald M. Ponton in their annotations in “Topographic Memoir on East and West Florida with Itineraries of General Jackson’s Army, 1818 by Captain Hugh Young, Corps of Topographical Engineers, USA”, Florida Historical Quarterly XIII, 3 (Jan. 1935), f.n. 62, 157; however Boyd and Ponton readily admit that the trail on Barnard Roman’s Map of 1775  is shown as the “Road to the Upper Creek Nation.” Furthermore Joseph Purcell on his 1778 Map of the Road from Pensacola in West Florida to St. Augustine in East Florida clearly shows the “Red Ground Path” to be an east-west route from the Seminole village of Ekanachettee (Red Ground) to the point of intersection with The Lower Creek Trading Path. Close to this intersection is another intersecting trail called the “Path to the Tukabatchees,” who were the Upper Creeks. The designation Jackson Red Ground Trail therefore is historically inaccurate.

[iv] I estimate that only about 10.5 percent of the Florida Trail is in the footprint of the historic trail. 25.7 percent closely parallels it, and 63.7 percent diverges considerably from the original. The 1826, 1828 and resurvey maps of 1851 recorded coordinates of the trail along section lines. To determine the route between the coordinates involved using early aerial photos from the 1940’s and 1950’s. In most cases, trails or vestiges of trails could be discerned connecting the coordinates. If no signs of trails could be detected, the route of less resistance was used.